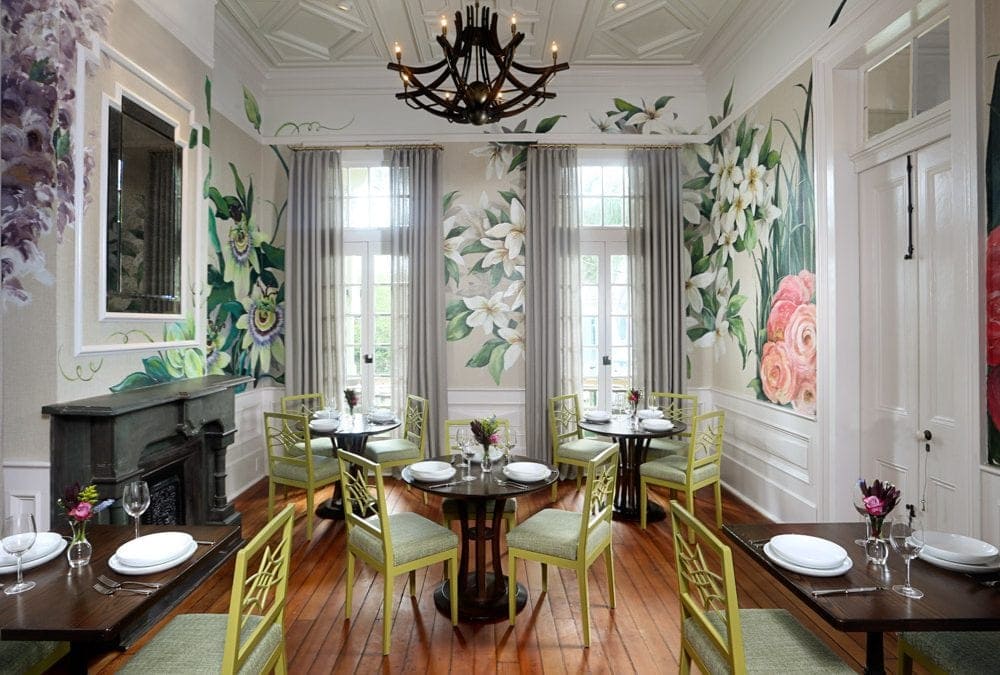 Built in 1884 to serve as a family home, the Italianate raised center hall cottage known as the Country Club has seen several incarnations, adjacent property acquisitions, post-hurricane restorations and owners since its founding in 1977.

The name of this unique, hidden neighborhood oasis was created as a satirical nod to the lively, inclusive poolside culture that has prevailed.

Tucked away in the charming Bywater neighborhood of New Orleans, the hip bohemian haven was acquired by its current owners in 2003. A commercial kitchen was added in 2007, resulting in the club’s growth in popularity that was augmented by a bodacious, lively weekend drag brunch.

In 2015, the club’s owners embarked on a rebranding to attract a broader clientele beyond its loyal locals. The objectives: Renovating the interior and the outdoor pool areas and elevating the cuisine. Successful in their myriad rebranding efforts, the Country Club’s base expanded to include a wide range of new local foodies and visitors from afar.

Ferrand Design, an award-winning New Orleans interior design firm, was engaged for the rebranding and redesign of both the interior and exterior elements of the storied Bywater Country Club that was initially frequented by a mostly gay clientele.

“After meeting with the owner and seeing the space, I knew there was great potential for a drastic transformation,” says designer Lauren Ferrand. “Understanding the unique culture of the neighborhood, paired with the openness to embrace the unconventional, I saw a tremendous opportunity to create a unique, playful and memorable ambiance in the restaurant.”

Acclaimed architectural photographer Chad Chenier was tapped to capture the elaborate, year-long transformation and interpret the client’s vision through the lens. He artfully elevated the varied spaces, orienting viewers from room to room while utilizing multiple perspectives to convey a compelling narrative that seamlessly interplays architecture and interior design.

“We were looking for someone who had an eye for capturing interesting interior spaces and architectural details,” says Ferrand. “Chad came highly recommended through friends and colleagues. He delivered beautiful photographs and was such a pleasure to work with.”

Ferrand’s design concept, which she pursued with business partner Ashley Bowman, featured traditional architectural elements juxtaposed with an abundance of whimsy, from the custom crown molding, raised panel wainscoting and millwork by carpenter Andrew Goodrow (reflecting the building’s 1884 origins) to the bold hand-painted murals by local artist Cindy Mathis (depicting Jurassic-size flowers and tropical parrots in the parlors and a burst of butterflies in the bar).

An intriguing variety of witty portraits by Louis St. Lewis (whose works are in the collections of numerous museums) were also commissioned.

“After sourcing through local art dealers, we found Louis St. Lewis,” says Ferrand. “His portraits in collaboration with Nate Schaeffer, neon artist, were commissioned pieces that I felt complemented the style perfectly.”

The designers set out to retain the Country Club’s festive vibe that has been intrinsic since its inception, while also mimicking the teasing inference of its Country Club moniker that typifies exclusive clubs with golf course memberships.

“Our concept for the space was to create a tongue-in-cheek interpretation of a high-class country club,” says Ferrand. “In other words, it was a camp style version of a traditional country club. Some of the design elements used to enforce this were the exaggerated scale of the florals painted in the double parlor, and bold graphic wallpaper adorning the bar mixed with the traditional millwork and lighting,” she adds.

Completed in 2017, Ferrand Design transformed the Country Club’s interior into an artsy dining haven and posh bar enhanced by whimsical art, custom feature walls and finishes, custom furniture, lighting and accessories. The existing restrooms were overhauled and a unisex restroom was added, thanks to an expansion into the former billiards room.

“The Country Club boasts an inclusive LGBTQ community and one way to show support and inclusion was to incorporate a third unisex bathroom,” says Ferrand.

The women’s restroom floor plan was changed to incorporate a custom two-sided floating marble and brass vanity. “The classic walnut stalls and floor-to-ceiling green velvet draperies are a grounding element to the playful addition of the illuminated bubble art mermaid in the place of a window,” says Ferrand. “The bubbles actually move and the mermaid is an image behind the bubbles. The men’s restroom has the same classic walnut elements and also incorporates vibrant glazed blue-green tiles.”

“The warm weather months are a busy season for the Country Club, and both locals and tourists flock to this lively neighborhood oasis and pool,” says Ferrand. “After many years of wear and tear, the outdoor bathrooms and locker room were in need of a face-lift.”

A modern-but-classic custom tile pattern, inspired by florals blended with a meandering Greek key motif reminiscent of Roman/Greek baths, emerged in a tropical mosaic installation. Other improvements: HVAC upgrades to keep rooms cooler and less humid and the changing rooms for added privacy.

“The truly unique aspect of working with the Country Club was that many of the devoted patrons and staff were like family,” says Ferrand. “It was a challenge to make drastic changes to a space that many already knew and loved.”

Judging by the Country Club’s growing popularity and broadening clientele following the renovation, Ferrand’s vibrant designs and satirical nods have served to please both locals and tourists alike.

Some patrons tend to linger in the bar and lounge area, seated in the heavy custom round-back chairs while sipping craft cocktails, gazing upwards at Goodrow’s geometric walnut coffered ceiling that he crafted to match the massive walnut bar, while others ponder those mysterious Lewis portraits near a wall of ascending butterflies, or become mesmerized by the bright green birds adrift in a tropical paradise.

“My favorite part of the project has to be the hand-painted murals, my personal favorite being the monk parakeets painted in the dining room and the center hall,” says Ferrand. “These talkative green birds can be found all around New Orleans. They are considered to be an invasive species that accidentally ended up here. I really enjoy this symbolism, something that isn’t supposed to be here but makes ‘here’ better. What a metaphor for what it means to be a New Orleanian.” 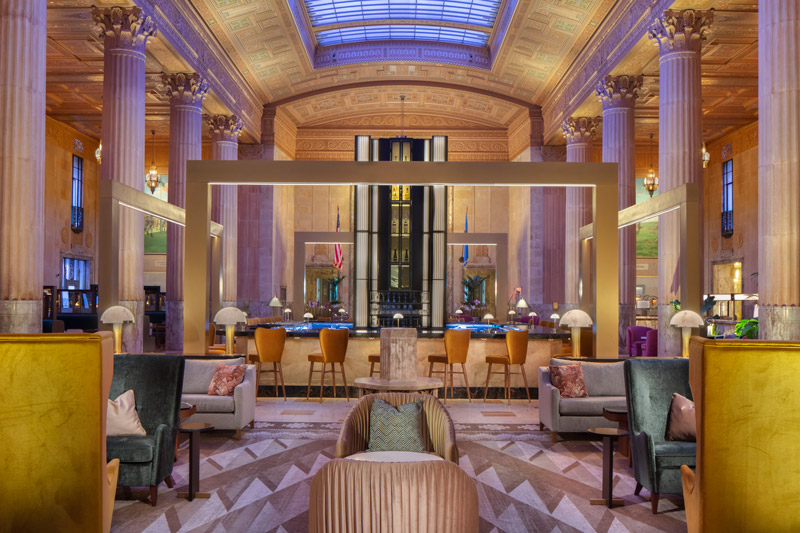